We’ve been doing a lot of pull tests and drop tests lately, validating the operating parameters of our TRACE™ Comprehensive Capability Micro Rope Systems.  During a day of testing, I thought I would pull some Raptor™ Buckles to destruction and measure peak forces, just out of curiosity.  We’ve been using Cobra® Buckles on our X-Belts™ and M-Harnesses™ since the beginning and, keeping an open mind for alternative possibilities, I wanted to validate the Raptor™ personally.  There has been some controversy around them and I figured the best way to sort it out was to to see for myself.

It’s worth noting that the testing we did was completely independent.  The buckles were free samples from the sales rep, however when providing them, no one intended them to be used for testing.  We were not asked to test them, compensated for the testing, nor have we provided JBC Corp. or AustriAlpin directly with our test data.  This was strictly for our own information.

We pulled 2 x new, 1.75″ Raptor™ Buckles.   The first one we tested in non-adjustable configuration, direct pull, meaning the webbing was not threaded through the existing ladder lock bar, and the pull was directly on the buckle, not sharing the load on a second webbing leg of a loop.  For the sake of comparison, this is the same buckle configuration that J.H. Holland conducted the testing on (they also did not thread the webbing through the ladder lock, but rather placed it over the ladder lock bar).  They, however, configured it in loop configuration, meaning a second webbing leg supporting (theoretically, doubling the load capacity) of the total webbing loop, with the weak point still being the buckle.

Note that the ladder lock is not threaded. This is not the configuration of function.

On the Raptor™ Buckle website they state they are rated to 18kN, though they don’t mention (and it is important to understand) that is in ‘loop’  configuration, meaning the buckle leg is only taking half the load.  In direct pull, which is how we tested them, the rating is 9kN.  They also state that the average peak force during destruction testing on the 1.75″ buckle is 24.4kN in loop configuration.  From that, one could extrapolate and hypothesize that a direct pull would have broke at ~12.2kN, or half the force.  These tests were conducted on contract by J. Henry Holland Corp for JBC Corp, the OEM Distributor of the buckle (manufactured by ADF).

Our testing broke the buckle at a peak force of 9.451kN, failing at the opposite side of the ladder lock (female side) at the corner rivet points, shearing the aluminum plates.  Which granted, is above the rated load of 9kN, though it’s not even close to the extrapolated rating from the J.H. Holland testing of 12.2kN.  So it begs the question, why such a difference?  Of note to mention, we did not pull the buckle to the rated load and hold it for two minutes before pulling to destruction as the J.H. Holland test did either, which is a more aggressive test.  We also pulled ours with webbing wrapped around the frame not the ladder lock bar, however the buckle broke on the opposite side of the buckle, so that factor becomes irrelevant.

The next test we did was in ladder lock configuration, which is actually the configuration of function/operation and, in my opinion, how the buckle should be rated.  It is worth noting that the J.H. Holland testing did not test the buckle in this manner.  I had anticipated the webbing being cut because of the sharp edges of the bar and frame in the design.  To my surprise, the webbing did not break, but rather the buckle broke by the ladder lock bar bending the frame and the frame failing at 6.981kN.  This is well under the 9kN rating. 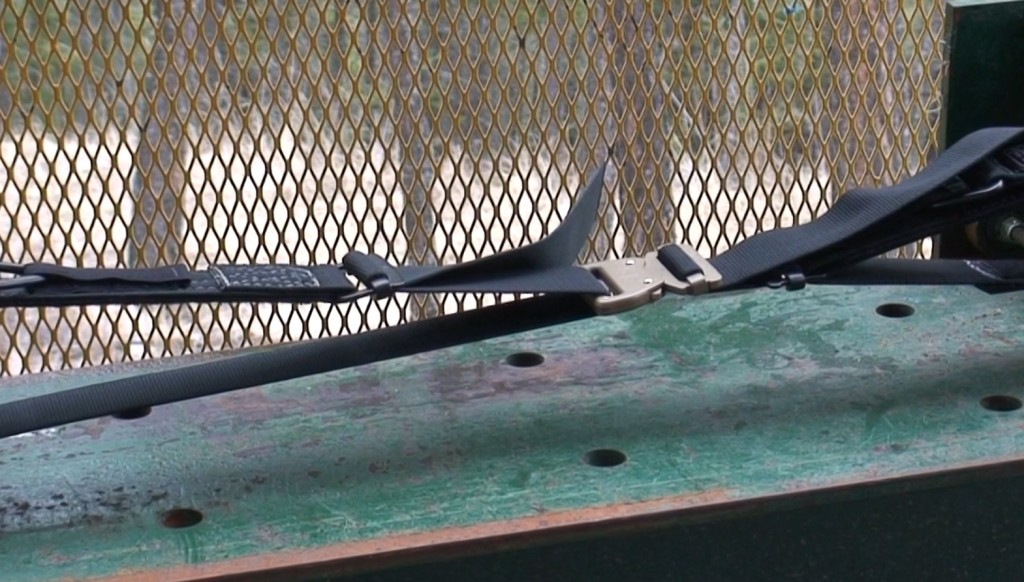 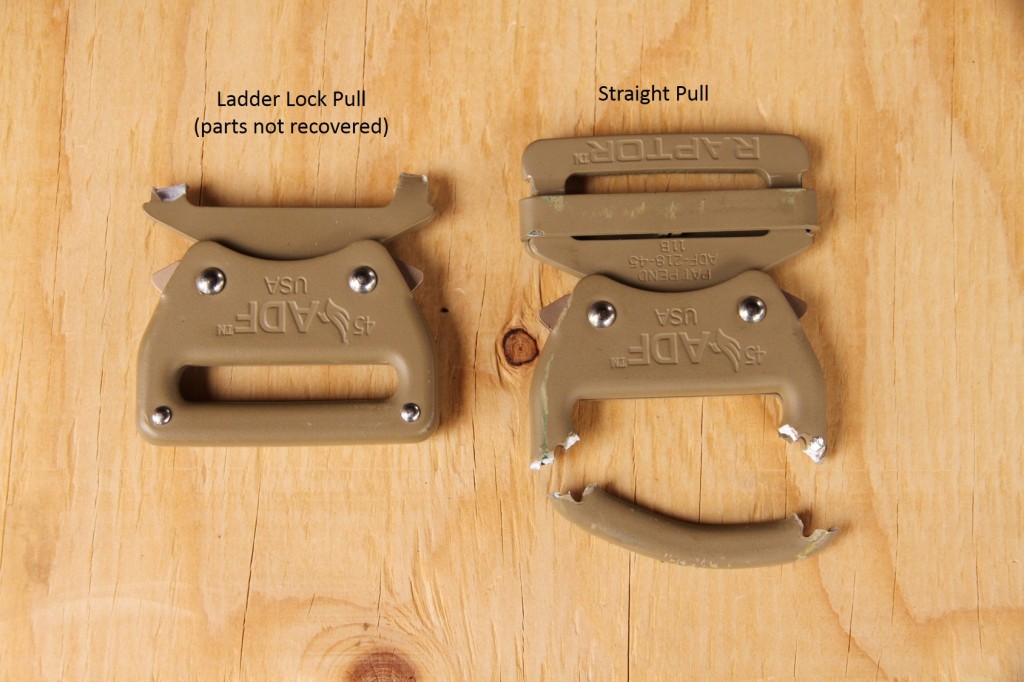 What we didn’t do was an apples to apples comparison yet.  I’ve referenced the Raptor™ Buckle claimed strength, so I’ll reference AustriAlpin data.  They actually have data from internal testing in ladder lock mode where they did 12 test samples.  The weakest of those samples in ladder lock mode broke at 10.8kN, well above the 9kN rating.

Other differences that we noted that contributed to our decision to stick with the Cobra® Buckles included the fact that the springs of the release tabs are visible in the Raptor™, thus exposed and prone to corruption.  When we compared that to the Cobra®, they had much tighter tolerances in their fabrication and assembly noted and no visible springs or ‘wiggle’/’play’ in the tabs, resisting foreign corruption from fowling the mechanism.  And fairly obvious, the riveted plating gap on the Raptor™ also allows for debris to collect inside the buckle between the two plates.  The Raptor™ also had a much wider profile, most likely due to the hollow plate design, making threading through belt loops much more challenging.  The Cobra®  aesthetic is more appealing to us, and AustriAlpin Inc. has been making the Cobra® Buckle for a very long time, making them tried, tested and true.

We encourage critical thought when evaluating components of any life support system, including scrutiny of this testing.  We only pulled one test sample in each configuration without a direct comparison test to the Cobra® Buckle, so take that for what it’s worth.

If you’d like us to test buckles or micro rope systems in configurations that have not been done, and are relevant, we’ll certainly entertain your ideas.  Please send them to us and we’ll see what we can do, and let us know what you think about this or other testing that we’ve conducted.